Recently, someone on a Facebook group I am in tried to use a particular rule of Greek grammar (known as Sharp’s sixth rule) to prove that 2 Corinthians 13:14 and Matthew 28:19 teach the Trinity doctrine. His explanation sounds convincing if you don’t know Greek; but when you know Greek, you realize that things are not as simple as our Greek-y Trinitarian would have us believe. I will post a screenshot of his Facebook post below, and then I will work through my response. 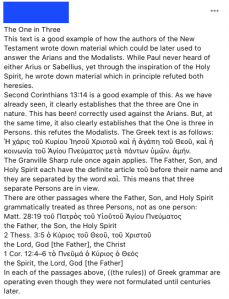 A word of clarification before we begin. When our Trinitarian apologist uses the term Arian, he means people like Jehovah’s Witnesses who do not believe Jesus is God but only a man. I do not believe this: Jesus is God manifest in the flesh. When our Trinitarian friend uses the term Modalism (associated with the historical personality Sabellius), he is referring to an ancient heresy which taught that God started as the Father, then stopped being the Father and changed into the Son at the incarnation, and then stopped being the Son and changed into the Holy Ghost at the ascension or Pentecost.

For various reasons, Oneness Christians like myself are often accused of this heresy. I also do not believe this. God did not stop being the Father when he manifested himself in his Son in the incarnation; and Jesus did not stop being the Son when he poured out his Spirit the Holy Ghost at Pentecost. But enough on that. Now to get to our Trinitarian friend’s (mis)handling of Granville Sharp’s sixth rule.*

According to this apologist, if two nouns separated by καί both have the definite article, then those two nouns MUST refer to two separate persons without exception. But this is not the case. This is a complete misrepresentation and oversimplification of Granville Sharp’s sixth rule. I doubt that our friend has ever read Sharp’s original articulation of his six rules; but I have, so the problems in our friend’s presentation are easy to spot.

First of all, Sharp himself admitted that there were exceptions his sixth rule. According to Sharp, his sixth rule applied “Except [when] distinct and different actions intended to be attributed to one and the same person; in which case, if the the sentence is not expressed agreeably to the three first rules, but appears as an exception to this sixth rule, or even to the fifth, (for this exception relates to both rules,) the context must explain or point out plainly the person to whom the two nouns relate” (Remarks, p. 15, emphasis in original).

In other words, two articular nouns joined by καί can and often do refer to only one person—as long as distinct aspects of that person are intended. After stating as much, Sharp precedes to list numerous exceptions to this rule from the New Testament.

Take for example John 20:28 where Thomas calls Jesus “My Lord and My God / ὁ κύριος μου καί ὁ θέος μου.” You will notice that κύριος and θέος are both preceded by the definite article ὁ. And yet “Lord” and “God” refer to only a single person here—unless our Trinitarian friend wants us to think that Jesus is multiple people in one. [A heresy of its own, for the record.] Consider also Rev 1:17-18 Where Jesus says “I am the first and the last, the one who lives / ἐγω εἰμί ὁ πρῶτος καὶ ὁ ἔσχατος, καὶ ὁ ζῶν.” In this sentence three articular terms are joined by καί, and yet they all refer to the same person, Jesus (see also Rev 2:8, 22:13). Sharp only listed exceptions from the NT, but the number of exceptions to the sixth rule could be increased substantially if the LXX were considered. Thus Sharp himself admitted that his sixth rule was not without exception.

Secondly, in his original treatise on the subject, Sharp NEVER applies his sixth rule to Matt 28:19 or to 2 Corinthians 13:14. This fact is glaring. Matthew 28:19 especially is such an obvious place to apply the sixth rule; the fact that Sharp never applied this rule there should catch our attention. By applying his sixth rule to these passage, our Trinitarian friend has at best gone beyond what Sharp himself lays out in his treatise—and at worst, has taken Sharp to mean something that Sharp never intended. Doesn’t this seem illegitimate to anyone else?

Thirdly, Sharp’s sixth rule is the least articulated/clarified of Sharp’s six rules. According to Sharp, two articular nouns separated by καί “denotes that the second noun expresses a different person” (Remarks, p. 14, emphasis added). And yet, the very first example Sharp gives is John 1:17 “Grace and truth / ἡ χάρις καὶ ἡ ἀλήθεια.” The only problem is, χάρις and ἀλήθεια aren’t persons! So technically, since these terms aren’t persons, Sharp’s own first example of the rule wouldn’t even be classified by the rule!

So, by way of conclusion, it is perhaps very unwise to use Sharp’s most sloppily articulated rule—a rule which Sharp himself concedes has many exceptions!—to read the Trinity into verses to which Sharp never applied his sixth rule. Hopefully our Trinitarian friend will reconsider his understanding of Sharp, read Sharp’s own writings on the subject, study his Bible, and receive revelation of God’s Oneness.

*The history of Granville Sharp and his work on the grammar of the Greek NT is fascinating, but unfortunately we do not have space to address it here.

4 thoughts on “The Trinity and Sharp’s Sixth Rule”